DS Smith is pleased to confirm that it has received the Brownfield Briefing Award’s Best Biodiversity Enhancement Award for its environmental remediation project at the site of its former papermaking mill at Silverton, Devon, UK. 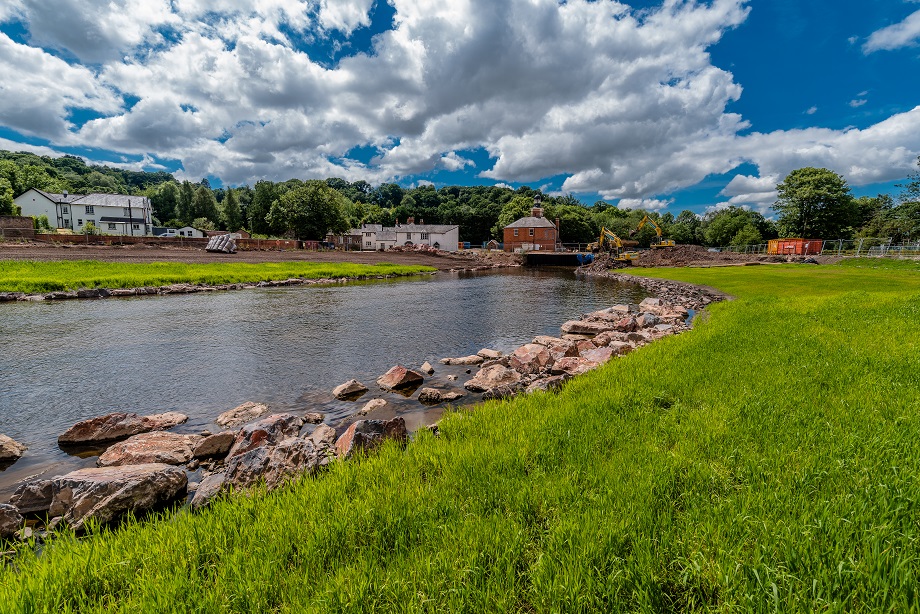 Silverton Mill was one of the UK’s oldest paper mills, and was located within the Killerton National Trust estate in Devon. It closed its doors in 1999 after a paper manufacturing history that had lasted over 200 years, but had left the surrounding area contaminated with industrial waste. The mill buildings themselves rapidly decayed in the years after the machinery was removed from the site.

One of DS Smith’s corporate goals is to lead the way in sustainability, and when environmental and safety concerns around the site increased, the company launched an extensive demolition and environmental remediation project to improve the site on behalf of all of the mill’s former owners.

The site had been in use for industrial papermaking since the early 1800s, and as a location for grain mills since around the 1520s. When DS Smith were manufacturing paper on-site, during 1978 to 1999, the mill contained 3 paper machines and produced up to 45,000 tonnes of high quality paper every year. The River Culm supplied water to the mill through a culvert – a tunnel built to allow the flow of water – that ran directly underneath the site. The buildings and most of the culvert needed to be demolished to make the location safe for wildlife as well as for passers-by, and to return it to its natural environment.

The centuries of heavy industrial use had significant impact on the area’s environmental wellbeing and ecology. The land needed to be cleaned up, and the area around the mill was susceptible to flooding due to the impact of the culverted river. When planning the works, ecology surveys identified roosts of rare Daubenton bats within the culvert, and brown long-eared bats within the mill building itself, which needed to be protected during the works. The bats return to roost every year, so it’s important to protect their habitat.

“We identified a bat roost containing up to 100 individual Daubenton’s bats in a section of the culvert,” said Dr Stephanie Murphy, an ecologist at RPS Group who provided an ecological consultancy service for the project. “Historical data from local bat groups indicated that up to 200 individual Daubenton’s bats had been recorded in this roost. It is therefore one of the largest of its type in the UK, so it was important to protect the roost by retaining 60 metres of the culvert and carefully demolishing the rest, so as to not to disturb them.”

The majority of the mill buildings and the culvert were demolished, allowing the project to excavate and treat the ground beneath.

A new open channel was excavated for the River Culm. The design maximised the flows that could pass through the site, to reduce flood risk in the vicinity, whilst providing natural features to enhance biodiversity appeal in the river corridor. Landscaping works adjacent to the channel allowed the provision of flood defences to protect remaining infrastructure from flooding, and provide opportunities for future development.

After removing the buildings, restructuring the river, and cleaning up the soil, the area was seeded with native grasses, rushes, and wildflowers, and access points and pathways were built for local walkers.

Wildlife returned within just three weeks of the remediation finishing. Otters and badgers have been observed on the site, the river boasts perch and pike in the waters, and also supports a wide variety of birds, including herons, kingfishers, geese, and swans.  In a letter to the project team, the National Trust described the River Culm and surrounding land as “clear, clean, decontaminated and beautiful”.

Some of the buildings and a section of the culvert remain standing. Not only will this preserve some of the history of the site and protect the existing bat roosts, but the old structures will shelter other species of birds, too, encouraging future biodiversity enhancement on-site.

Upon completion, the team received a glowing report from the National Trust, and won the Best Biodiversity Enhancement Award at the Brownfield Briefing Awards.

The Brownfield Briefing Awards are the flagship awards for the remediation sector, celebrating technical and conceptual excellence in projects on ‘brownfield’ land – land that has previously been developed for commercial or industrial purposes.

The Best Biodiversity Enhancement Award recognises that the Silverton Mill remediation project has clear biodiversity and flood prevention benefits, enhances the visual impact of the site, and respects the integrity of local ecosystems while demonstrating innovative design and long-term thinking.

It was a long and challenging project, but I am very proud that we have successfully demolished and recovered the site to a level that has improved the surrounding British countryside, for the wildlife and the local communities.

This fantastic project shows that DS Smith’s focus on protecting and preserving the natural world stretches beyond its own products and locations. In ensuring that a former industrial site has been returned to nature, DS Smith has expanded on its existing commitments to focus on using recycled paper as a feedstock for packaging production, and to look to source any virgin fibre from sustainable and chain of custody certified sources. As a company whose stated goal is to lead the way in sustainability, remediation projects like Silverton Mill show that this commitment applies to DS Smith’s former, as well as current, areas of operation.

For further information about DS Smith’s sustainability commitments, take a look at our Group Sustainability Review.