DS Smith Retail Marketing has a long-standing relationship with Twentieth Century Fox and worked with them on the highly anticipated launch of the latest film in the Kingsman franchise.

Twentieth Century Fox were looking to gain additional front of space to promote awareness of the film release and to hit defined sales targets of DVD sales – particularly on the all-important Day 1.

The release was supported by a range of stock holding units and standees to fit the requirements of the varying store estates. In addition to this we created a wow event piece to secure foyer space in the retailers and generate excitement about the launch. 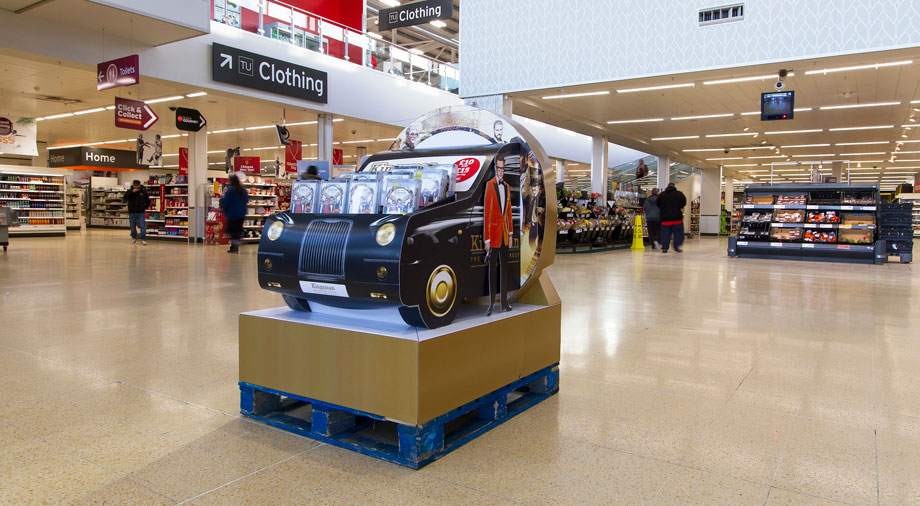 The taxi is synonymous with the film and is used in the dramatic opening scene which features a taxi chase around iconic sites in London.  The taxi then turns into a submarine and submerges into the Thames.  We therefore used the taxi icon as the centrepiece of the display.  We incorporated stock into the bonnet of the taxi to maximise effectiveness and increase overall impact as opposed to siting standard stock holding units next to the taxi.

Key cast members were added as cut out characters to add depth to the unit and showcase the great talent in the film. Creative was featured on all sides of the unit to capture shopper attention as they moved through the store.

The unit was part of a wider marketing campaign with a total of 16 varieties of POS units produced for this campaign.

We are working with our clients to understand what works at retail.

Learn more about Point of Sale
Contact us for more information